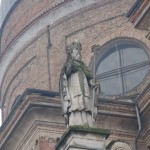 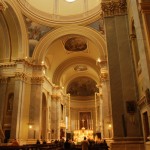 Construction was fragmentary; it began in 1770 and was repeatedly interrupted and resumed, until completion in 1880. The façade is decorated with Belcaro statues (19th century). The interior houses some 17th and 18th century works from the old Parish Church and other oratories. The paintings on the spandrels of the cupola were done by Trecourt and then done again in 1876 by Antonio Guadagnini. The stucco statues of the apostles are the work of Count Gerolamo Oldofredi Tadini from Calcio; the side altars reproduce the neoclassical style and were all built between the late nineteenth and early twentieth centuries.